Six major summer festivals of the Tohoku region combined into one grand event!

Enjoy Tohoku Culture Through the Six Major Festivals of the Region!

The Tohoku Kizuna Festival is a yearly event where the six most famous summer festivals from across the Tohoku Region are celebrated all at once. The event was originally known as the Tohoku Rokkonsai, launched in 2011 as a beacon for the recovery of the region following the Great East Japan Earthquake and Tsunami. Not only was it a way to mourn the losses from the disaster, but it also served as a beacon of inspiration for disaster victims and encouraged support, attention, and tourism to the disaster afflicted region. In 2017, the festival was renamed to Tohoku Kizuna Festival, a change that highlights the solidarity of the region —"kizuna" is the Japanese word for "bonds"— in the spirit of reconstruction.

Every year, the festival is hosted by a different prefecture, and is a rare opportunity to experience the rich and diverse culture of the Tohoku Region all in one place. The most notable event is the large parade, featuring the performing arts and other elements from the signature festivals of each prefecture.

Find out more about each festival below!

The Sendai Tanabata Festival is a centuries old traditional event that was passed down to today from the days of feudal lord Date Masamune, ruler of Sendai Domain. Since then, the event has spread throughout the country and is celebrated all over Japan.

Sendai Tanabata is the largest Tanabata celebration in the entire country, held in the streets of downtown Sendai every year on August 6th through to the 8th. Typically, the Tanabata Festival is kicked off with a large firework display on the evening of August 5th, marking the beginning of the 3 day long celebration. In addition to the colorful bamboo streamers, food stalls and carnival game booths line the bustling city streets throughout the whole downtown area. The event is so famous, it is known as one of the 3 Great Festivals of Tohoku, along with Akita's Kanto Festival and Aomori's Nebuta Festival! 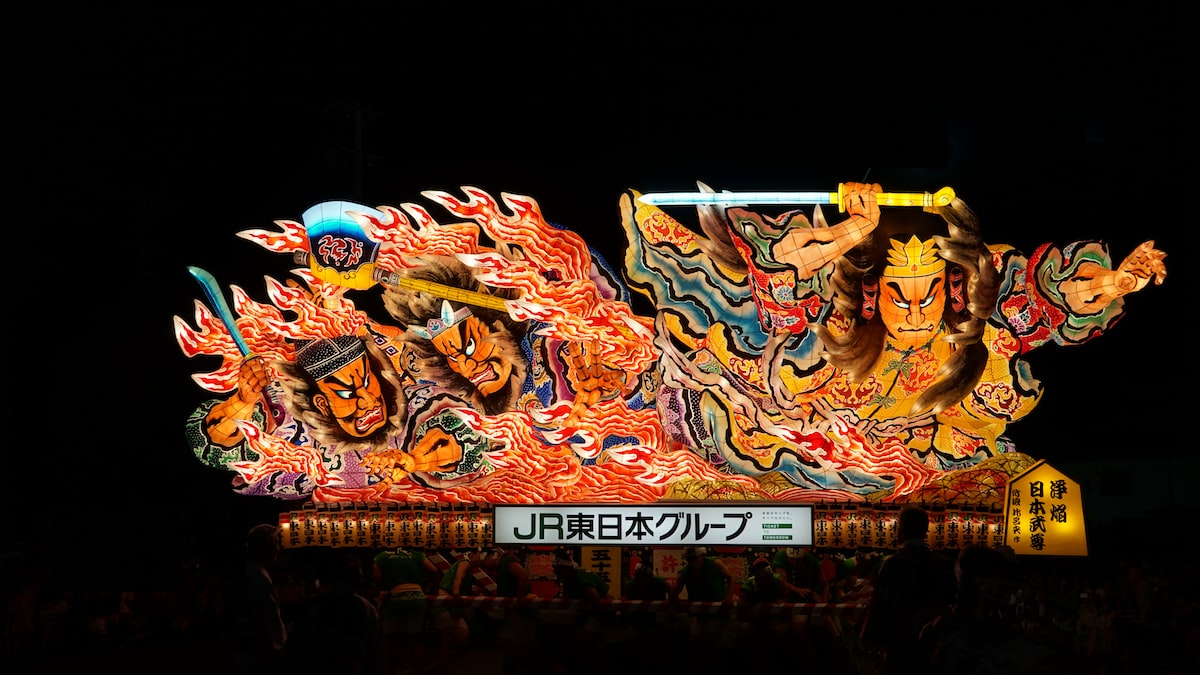 Believed to be a a variant of the Tanabata Festival with the added combination of traditions and customs from Aomori's Tsugaru Area, the Nebuta Matsuri attracts hundreds of thousands of spectators each year, who all come to see the festival's main attraction: the parade of impressive human-shaped floats called Nebuta. These gigantic floats often depict historical and mythical figures, such as ancient warlords, historical figures, and kabuki characters. Different eye-catching facial expressions are painted on each float, including beautiful, elegant, melancholic, daring and aggressive ones!

Come see the parade of floats along with Haneto dancers (literally "prancing people") who leap and bound down the streets of Aomori City to the exhilirating melodies of the Nebuta Bayashi musicians. Or, join in the dancing parade yourself by dressing in the haneto costume, an integral part of the festival’s charm (due to Covid-19, those who wish to join in should book in advance)!

Akita Prefecture's 270 year old festival related to Tanabata features an incredible display of lanterns, called Kanto, against the night's sky. These incredible lanterns of varying sizes are made up of a total of 280 bamboo poles decorated with 10 000 lanterns and closely resemble ears of rice swaying in the summer breeze. These embody the wishes of the locals for a bountiful harvest, the whole purpose of the festival. The alrgest Kanto's, called Okawa, are decorated with 46 lanterns (lit by real candles!), measure 12 meters high, and weigh a whopping 50kg! They are wielded by Sashite performers, who move the Kanto from the palm of their hands, to their foreheads, to their shoulders, to their lower backs, and back again! This performance is an incredible display of strength and otherworldly skill that can't be missed!

Sansa Odori Matsuri is not only one of the 5 Great Festivals of Tohoku, but it is also the largest drum parade in the world! The festival features a 1km-long parade of over 10 000 drummers and dancers performing down Morioka City's Chuodoori Street in perfect synchronisation. In addition to the main parade, you can enjoy Iwate's rich culture through "Traditional Sansa Odori Special Performances," which are unique to the particular district they originated from and have been passed down since the creation of the city of Morioka. Join in on the dancing yourself when the dancing instructor gestures for you to part-take in the parade and shows you the ropes on how to dance Sansa Odori. Anyone can join regardless of their attire, so don't be shy and jump right in!

The Yamagata Hanagasa Festival ​is an annual event spanning across 3 days and featuring over 10 000 dancers. The festival has grown to become a major event, and is considered one of the great summer festivals of North-East Japan. Millions of spectators from all over the country come to enjoy the groups of dancers waving hats intricately decorated with orange safflowers —the flower of Yamagata. Dressed in their own spectacular costumes, dancers move to the rythm of the Hanagasa Ondo, or "Flower Hat Folk Song", comprised of the beat of the taiko drums and the chorus of “Yassho makkasho” chanting. Come and enjoy the diversity of Hanagasa Odori dances, accompanied by a wide variety of beautifully decorated flower hats. You can join in on the dance too wth the help of a Hanagasa fan, which you can use to dance to your hearts content!

Named after Japanese straw sandals called waraji, this festival is regarded as the epitome of summer in Fukushima. Featuring a parade of waraji sandals, including a giant waraji sandal, the largest in the country, measuring 12 meters long, 1.4 meters wide, and weighing a hefty 2 tons! This sandal is dedicated to the Haguro Shrine on the symbol of Fukushima City: Mount Shinobu. For 400 years, every February locals dedicated a large waraji to this shrine to pray for healthy legs and safe travels. In 1970, the Waraji Festival became the summer event during which the second waraji sandal is offered, thereby completing the waraji sandal set and reinforcing the wishes from the first offering. The procession leading up to the shrine is really a unique sight that can't be experienced anywhere else. Finally, the festival is filled with music, both traditional and contemporary, as well as impressive performances of waraji song and dance, with moves so simple, anyone can join in!

We just sent you an email. Please click the link in the email to confirm your subscription!